Like everyone else, January for me has been a month of getting back on track after a VERY gluttonous holiday season! I started the Whole 30 program on January 8, and have been about 90% faithful to it for almost three weeks now. I like the Whole 30 because it’s not really a diet. It’s just about eating real foods. Proteins, vegetables, and fruits. If you’re like me, eating clean is not necessarily the challenging part; it’s the planning and executing! When you’re cutting out dairy, grains, soy, alcohol, and sugar, you can still make delicious meals, but you have to be a bit more intentional about it. You can’t hide an overcooked piece of chicken under a pile of cheese and call it a day! (I wouldn’t know anything about that, just heard that’s what some people might do…😳) I really like spice and complexity, so I always look at it a bit as a cooking challenge as well. I’ve put together a dinner meal plan below with some of my favorites. Each of these meals uses a loose “recipe” that can be customized according to what you like and what you have. I would gladly eat any of these dinners on any given night, not just during a Whole 30!

Shrimp is one of my favorite proteins, especially the fresh gulf shrimp we are so blessed to have in abundance here in Houston. It’s always tasty, super quick cooking, and so incredibly versatile. I made these lettuce wraps on a night we were pressed for time, and they were such a big hit. I sauteed the shrimp in coconut oil with salt, pepper, and a pinch of crushed red pepper. Once they were cooked through, I squeezed the juice of a lime into the pan and added about 1/4 cup of coconut milk, just enough to barely coat the shrimp. I served the shrimp with bibb lettuce, guacamole, sauteed julienned zucchini and red bell pepper, cilantro, and the Whole Sisters’ “dump ranch,” which is a MUST HAVE for anyone doing the Whole 30! (My note on the dump ranch: avoid the Trader Joe’s brand coconut milk. It is great for curries or anything else, but it more “coconutty” than the other brands and makes this have a funny taste.)

If you’re a crockpot girl, this is for you. I found this easy peasy and delicious barbacoa recipe on the official Whole 30 Instagram feed. I served it to my kids in tortillas with shredded cheese and salsa, and they loved it! I used the dump ranch instead of the cilantro lime dressing in the recipe because it’s basically the same, and I already had some made. It was amazing! I tend to avoid crockpot recipes because the smell always seems to permeate my house, but I’ve finally figured out a way around that. I plug the crockpot into an outlet right next to the stove, and leave it sitting on the stove while it cooks with the vent hood running all day. It’s a game changer for me, and I’m so glad because I’m obsessed with this barbacoa!

I’ve always been a chicken piccata fan, so I was excited to find a Whole 30 approved recipe. It did not disappoint! The Defined Dish has become a favorite resource for me, and I know I’ll continue trying out her recipes long after I’m finished with the Whole 30. A touch of arrowroot powder helps thicken the sauce for this chicken piccata, and ghee gives it a buttery taste without the dairy. I served it with spiralized zucchini and sauteed mushrooms.

I bought this spiralizer a while back and it is a favorite of my family. With more surface area, the “zoodles” taste great either sauteed or raw, and so many other veggies are fun to experiment with too. Potatoes are a favorite!

This meal came about completely on accident. My plan was to make regular red meat sauce to serve with the spaghetti squash. I put the squash in the oven right after school (I roast them whole at 400 for about an hour), and when I went to make the sauce, I realized I had forgotten to thaw my ground beef. My husband passes right by Central Market on his way home, so he stopped for shrimp and I fed the kids PB&J’s! I sauteed some veggies I had on hand, including minced fresh ginger, which was key in the flavor profile of this dish. I then cooked the shrimp in coconut oil and seasoned with salt, pepper, about a teaspoon of red curry powder, a pinch of crushed red pepper flakes, and a bit of jarred minced garlic (one of my favorite shortcuts because I can never get the smell of fresh garlic from my fingers). Once the shrimp were done, I added the juice of one lime to the pan and about a half a can of coconut milk, along with a few dashes of coconut aminos and a squirt of Sriracha, which I KNOW isn’t Whole 30 approved but sometimes you have to live on the edge! I spooned it over spaghetti squash and topped with sliced green onions. This was AMAZING! And aside from cooking the squash, it came together in about ten minutes!

The great thing about Whole 30 is that you learn to keep things simple, and what is more simple than a meal of meat and potatoes? Not much to say about this “recipe” other than I got to use my new Joule sous vide to cook the filets, and I’m not sure I’ll ever cook a steak any other way. They really are that good! If you’re new to sous vide cooking, just know it takes a while because it’s low and slow. You’ll need to start dinner a lot earlier than you normally would. If you don’t know what I’m talking about at all, which I didn’t until I received this as a birthday gift, sous vide is a method of gently cooking in water that maintains an exact temperature, ensuring the items are cooked evenly.

For steaks, the length of time depends on thickness. These filets were about 2″ thick. I prefer medium-rare for steaks, so the temperature was 129 degrees, and the cook time was two hours. I filled a large pot with water, placed the sous vide in the pot, and used the app on my phone to start the cooking. Once the water reached the correct temperature, I seasoned the steaks with coarse salt, cracked black pepper, and garlic powder, placed them in a ziploc with a spoon in the bottom to weigh it down and clipped it the the side of the pot with a binder clip. (Neither step is necessary if you’re using vacuum-sealed items.) When time was up, I seared the steaks in grapeseed oil, and voila! This photo does not do it justice at all, and I wish I had taken one after I cut into it. It was PERFECT! I put the potatoes in the oven when there was about thirty minutes remaining on the sous vide, and I added the asparagus about twenty minutes after that. For my roasted potatoes, I whisk together a tablespoon of Dijon mustard (also not Whole 30 approved because of the wine content, but I think that’s just silly), a tablespoon of olive oil, salt, and pepper, and toss the potatoes before roasting at 425 for about thirty minutes. I drizzled the asparagus with olive oil and seasoned with salt and pepper. I hate overcooked asparagus, so for thick ones like these, I only cook about ten minutes, less for the skinnier ones.

I’ve done the Whole 30 four other times. The first time, I stuck to it pretty much 100% the entire time. With each subsequent Whole 30, I usually aim for 90%. I hate being weird about food when I’m out with other people…people who talk about diets nonstop are the worst! And if I find myself at home without anything compliant to eat, I’d rather have a little cheat than to skip meals. A few of my favorite must haves when doing the Whole 30 are:

Two sisters. Two styles. One lifestyle blog. Join us as we navigate our unique perspective on fashion, fun, and sisterhood! XOXO, C & C

Get all the latest In the Loop Style blog updates delivered to your email inbox.
Sign up for email updates!

Chandra and Chastiti deliver exclusive content via the In the Loop Style Newsletter.
Sign up for the Newsletter! 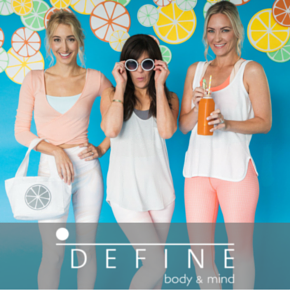 Chandra and Chastiti deliver exclusive content via the In the Loop Style Newsletter.

Get all the latest In the Loop Style blog updates delivered to your email inbox.

Search In the Loop Style